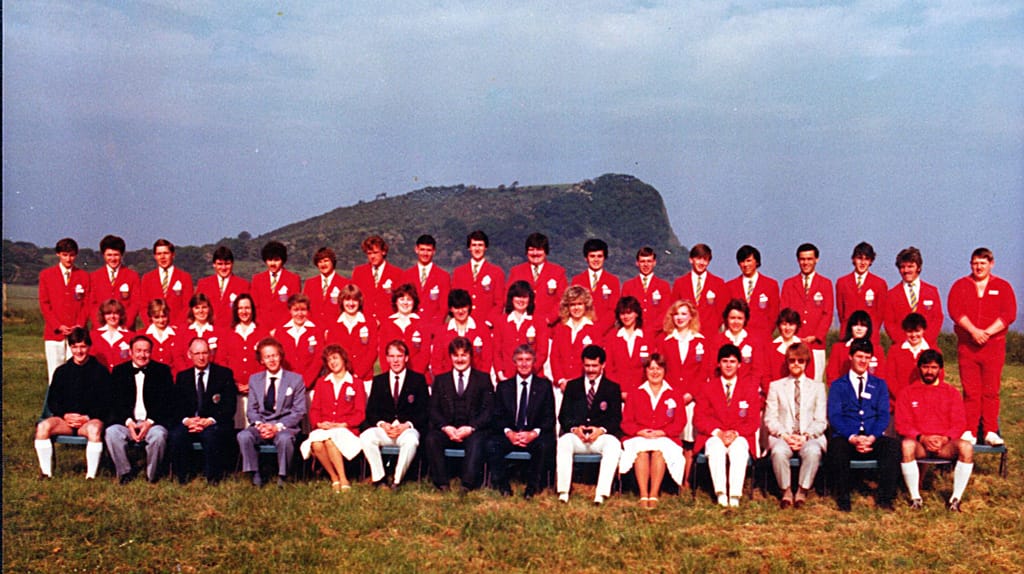 Working at Butlins took on a whole new meaning. Suddenly Butlins became the best place in the world.

25 years ago this year, the only Scottish base of the Butlins Empire closed its gates for the last time. To mark the occasion, former Butlins Ayr Redcoat, Frank McGroarty has released the final edition of his holiday camp trilogy, “How do you get the Donkeys up the stairs?” as an audiobook.

Written and narrated by Frank, “How do you get the Donkeys up the stairs?” is the final edition of a series of books, inspired by his three seasons working as a Butlins Ayr Redcoat during the early 1980’s regarded by many as the latter stages of the Hi-De-Hi era.

Just over a year ago, Frank published the paperback version of the final story, he then released the audiobook version in December last year, marking the end of what has been an eventful and creative 6-year project.

All titles in the series “What Time Does Midnight Cabaret Start?”  “Don’t Mention Hi-De-Hi!” and “How do you get the Donkeys up the Stairs?” are now available in Paperback and E Book from Amazon as are the audio book versions, which you can also download from Audible and iTunes.

“Butlins has created so many great memories for so many people, ‘said Frank. “And with it now 25 years since the closure of the Ayr Camp; it is quite something to think that there will be generation that will have not experienced a holiday there.”

“Times of course do change and so do British institutions like Butlins and of course, holidaymakers. With talk of the empire being sold this year, I would expect that there are more changes to come.”

“And with the release of all three titles in my Butlins Trilogy in all of the formats, I hope that it will bring back memories to all of those former holidaymakers and members of staff as well as give people an idea of what it was like to live and work at a camp that is now no longer there, during what was a golden era.”

Frank added: “Not forgetting that there is also a story in these books, a life changing journey for the main characters. Working at or going on holiday at Butlins changed so many lives – it certainly did for me.”

“Writing and publishing these stories has been a labour of love and I am so proud that I am able to offer these titles to the widest audience possible. I am so chuffed with the response I have received since their release so far.”

Frank is currently taking a break from his book writing, currently working on his Broadcasting projects, but will return to writing later in the year, with plans including a book of short stories along with a novel, far away from his holiday camp experiences, centred on American Football.

To find out more about the Butlins Holiday Camp Trilogy, click on the book covers located on this website’s home page