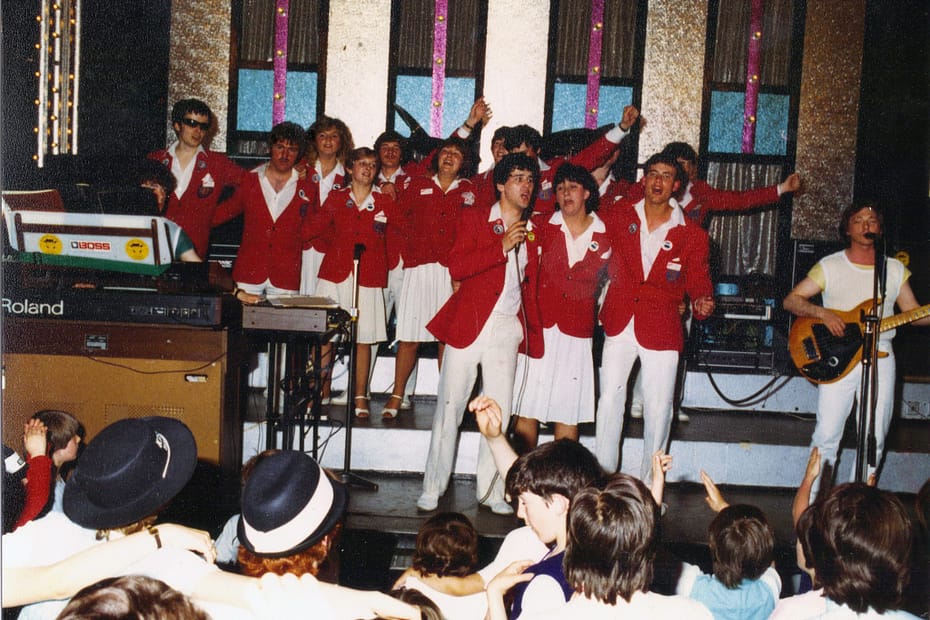 A love story or a trip down memory lane?  Greenock born Author, Frank McGroarty’s second novel is a combination of both, as he revisits a much loved holiday camp that once brought pleasure to thousands of holiday makers and changed his teenage life.

A love story or a trip down memory lane?  Greenock born Author, Frank McGroarty’s second novel is a combination of both, as he revisits a much loved holiday camp that once brought pleasure to thousands of holiday makers and changed his teenage life.

Don’t Mention Hi De Hi is the second instalment of a romantic trilogy inspired by his three life changing seasons working as a Butlins Ayr Redcoat during the early 1980’s regarded by many as the latter stages of the Hi-De-Hi era.

The first chapter of his Butlins Trilogy, What Time Does Midnight Start, combined a fictional story, with historical fact, giving readers an insight, through the eyes of fictional characters, what it was like to go on holiday at the former resort as well as working there.

Don’t Mention Hi De Hi, continues the story of the main character, teenager Terry McFadden from Greenock, who during that first season working as a Redcoat in 1982, closed the door on his childhood, received a major boost to his confidence working as a Redcoat, but also fell in love with Kitchen Assistant Angie Bierman.

A return to Ayr for the 1983 summer season was not guaranteed, so could their relationship survive in the “real world,” living either side of the country? If the invitation came, would they return to the holiday camp for a second season?”

Could Terry endure another season under the management of his mentor, Ron De Vere? Would Angie get to fulfil her own dream and join him as a Redcoat?

Said 53 year old Frank: “I was thrilled with the response from people to What Time Does Midnight Cabaret Start. I got so many positive reviews.  They said it brought back some happy memories as well as liking the story.  That meant a lot, as it was based on what happened to me.”

Only three of the original nine camps continue to operate, however the old style Butlins continues to be fondly remembered through the various reunions throughout the UK.

2018 will mark 20 years since the final season of the Butlins Ayr Camp, which is now a caravan park.  And for Frank, he hopes that this new publication will once again provide some happy holiday memories of a camp that is no longer there.

Said Frank, a former Journalist, now living in Armadale, West Lothian: “There is a generation who have never experienced a holiday at Butlins Ayr, but it still holds a special place in the hearts of many.”

“Having gone on holiday there as a child and having worked as a Redcoat for three years, I know how special the Ayr Camp was.”

He continued: “The one question I was asked after writing the first book was what happens next to the characters?  I hope I have answered those questions in this new book, whilst keep with the theme of the first one.”

“I am spent a year in putting this book together and I hope people will enjoy this as much as the first one.’

As well as developing his various writing projects, Frank and his wife and fellow ex Redcoat, Wendy, continue to maintain close links with their holiday camp past attending numerous Butlins reunions which sometimes involves them putting back on their much loved Red and Whites.

He said: “There are lots of old style Butlins reunions going on around the UK at the former camps and hotels.  My wife and I are especially looking forward to attending the Butlins International Reunion in Liverpool in October.  Not only will there be former staff members but also holiday makers who loved the old style Butlins experience.”

“Attending those reunions with my wife over the years, I have made many new wonderful friends as well as renewing friendships from years gone by.   We have a common bond.   We are a Butlins family. Don’t Mention Hi-De-Hi is dedicated to them, as both my wife and I are proud to be a part of that family.”