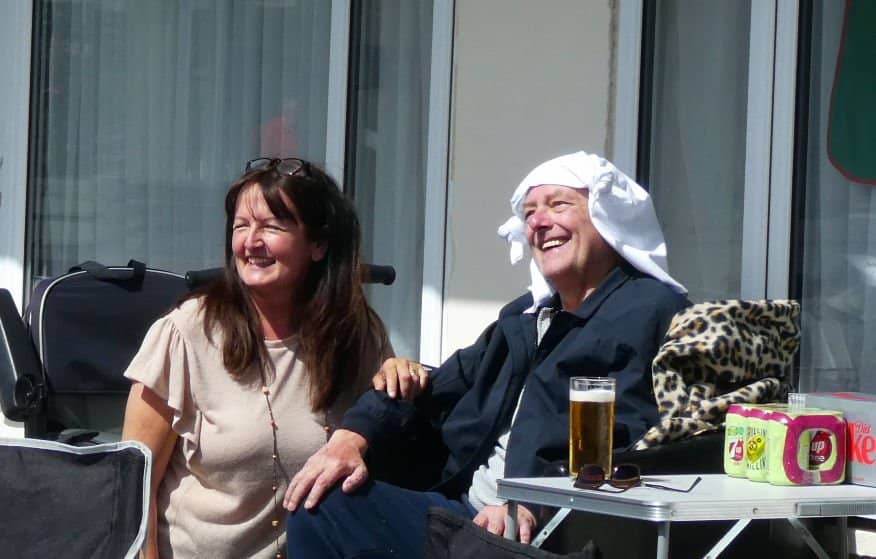 It is always a sad moment when we have to say farewell to a member of our Butlins Family.   We have lost several amazing people during these last few years.

So, it would be fair to say that many of us from around the UK and beyond, are hurting today following the sad passing of Butlins Legend Phil Wood.

How often have you heard the phrase “live life to the full”, that was Phil in every sense of the word, working as a Butlins Redcoat, Assistant Entertainments Manager, seeing the world driving his truck.   I bet I have missed something.

And we must not forget his wicked sense of humour. Something that never left him, even with all the health challenges he faced during the later years, and when he was in the hospital during those final weeks.

It was great meeting up with him at Sand Bay earlier this year, and even though we could see that he was struggling physically, there was not a time when he did not have us laughing and smiling.

In fact, like other members of our Butlins Family that have passed on, you just have to close your eyes for a few seconds, and you will quickly smile.   For a special memory will hit you and Phil would often feature in there.

Whether you have worked with Phil or knew him from the reunions, we will all have pictures with him in there that capture special moments.   And whilst during this sad time, we cannot help but grin when we look at our own pics as well as those other brilliant ones that appear on other people’s pages.

We all have our special “Phil Moments”.

I also have the bonus of our private messages that took place during our weekend Zoom meetings, as an aside from all those technical problems – and we had plenty of them.   We were reading those messages the other night.   They were written over a year ago and we were still laughing.

When we first knew Phil, it was as a great Boss during those Kid Venture Weeks, who was always up for a laugh.   And it was even more evident when we met up at the Reunions.  I cannot describe how great it was hooking up with him again after all this time.

You look at those videos from the 2014 Reunion, who can forget Phil as “Simon Cowell” during the “Forever Butlins Got Talent” night in Scarborough, staying in character throughout, even getting the obligatory glass of water poured over his head.

Then, of course, there were our “Lockdown Zoom Meetings,” where he introduced us to the finer things in life, “Marmite” and “Fettling”.

And when we all read that post from his hospital bed a few weeks ago, I do not think any of us were surprised, but it still was such a sad moment for us all reading it.   But what it did show was the outpouring of love for Phil.  It was good to hear that he was aware of that.

What it also showed was alongside that sense of humour, there was a man of courage, he was an inspiration to so many of us.

Now he is pain-free and as he embarks on his final journey; I hope that he finds at least seven “Vestal Doris’s are there waiting for him on the other side.

Rest in peace Phil.   It has been a privilege.